A Glass of Wine Can Give You These Health Benefits

Unlike a lot of alcoholic beverages, wine’s composition and ingredients can provide a wide variety of health benefits. While that’s not to say people should start drinking a bottle of red wine each day to avoid getting a stroke, if people could moderately drink wine, they could start to see the positive benefits.

Release Antioxidants Into the Body

Antioxidants are compounds that prevent oxidation. When oxidation occurs, natural compounds produce free radicals that damage the cells of natural tissue. When your body oxidizes, your cells start to deteriorate at a faster pace. This leads to minor effects such as skin aging, but it could also cause your cells to develop cancer. Wine, however, contains antioxidants that fight free radicals. White wine in particular has more phenols than red wine.

Several studies suggest that red and white wine can affect your immune system positively, boosting your immune system and fighting off viral and bacterial infection. The tannins found in red wine contain certain types of phenols. Apart from helping reduce free radicals as mentioned earlier, these are also capable of reducing the risk of heart disease by improving blood circulation.

For those at risk of stroke, wine can help prevent blood clotting. When you consume wine, the wine’s potent ingredients act as a thinner when it makes its way into the blood stream. It’s possible due to the contents of red grape skins, traces of which can still be found in wine, which is also believed to help insulin levels and reduce the risk of type 2 diabetes. Studies have found that this benefit is more likely to help females than males.

Those who want to decrease their chances of developing cancer might want to add a glass of wine to their regimen every now and then. Free radicals allow cancer cells to develop from rapidly damaged cells. A study conducted at Harvard Medical School found that men who drank up to seven glasses of red wine a week were 52 percent less likely to be diagnosed with prostate cancer compared to men who didn’t drink red wine. The evidence suggest that wine had an effect on aggressive cancer cells.

Your bone marrow, supported by calcium, helps your bones stay strong. Strong bones allow you better endurance and the less likely chance to injure yourself with broken bones and fractures. As we get older, however, your bones’ healing system starts to deteriorate to the point that it is no longer as strong as it was when you were younger. Older people have less denser bones, and as a result, they’re more likely to develop broken bones or joint pains. A solution to this was usually calcium pills or special milk formulas designed for older adults to lower the risk of osteoporosis. However, evidence suggests that drinking a glass of wine can also have a similar effect.

Red wine has large traces of silicon, an element which could offer improved bone density. Red wine also helps lessen inflammation – when your skin starts to swell a bit due to the slow healing process – which allows you to feel less pain. 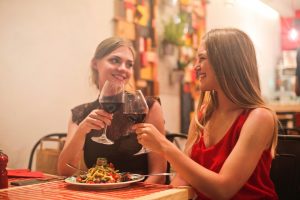 Food products like yogurt offer good bacteria for healthier digestion, but wine offers the same bacteria that may have a better culture. Wine is fermented, making it full of good bacteria that can help with digestion. Research even suggests it has a prebiotic effect, which can help the bacterial composition in our system.

According to a study from Columbia University in 2006, after examining a sample of over 1,400 participants, brain function declines much faster for people who don’t drink compared to people who do. However, people who heavily drank were also likely to receive negative benefits, so it was necessary to take this in moderation.

The study suggests that chemical substances in wine stimulated neurons and prevented them from dying in a normal rate. Apart from improving cognitive function in adults, it suggests that moderate drinkers were less likely to develop Alzheimer’s and Parkinson’s compared to those who didn’t drink and those that drank too much. 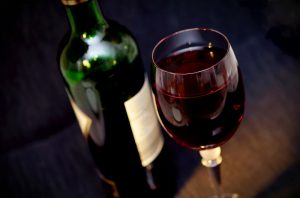 In many of these benefits though, you’ll see that they have a similar disclaimer. While some moderate drinkers fared better in health benefits that those who didn’t drink, they also did better than those who drank too much.

It’s like a U-shaped curve on a graph: don’t drink, and you won’t receive the benefits wine has to offer; drink too much, and you’ll get more of the negative effects of alcoholism that outweigh the benefits. You have to remember that wine, despite all its benefits and the enjoyable experience it provides, is still an alcoholic drink.

And when you imbibe too much on alcoholic drinks, it stops becoming an experience and instead becomes an addiction. And too much alcohol in your system could have short-term effects such as anxiety, slowed breathing and heartbeats, potential alcohol poisoning. It could also lead to long-term health risks such as liver disease, heart disease, stroke, and brain damage – the exact same diseases moderate drinking promises to help.